The High Notes of Musicians Earplugs

Musicians need the same level of care as any other patient, which means administering a thorough case history and audiologic test battery, verifying the fit and response of custom products, and instructing on proper fit and use of non-custom products. High-fidelity hearing protectors preserve the sound quality of music and voices, and are the best choice for most musicians’ hearing protection needs.

By Patricia A. Johnson, AuD

Perhaps no one appreciates the sense of hearing as much as musicians; those who make their living in the music industry spend thousands of hours listening in practice and performance, and it is critical that hearing is not compromised along the way. In my clinical work, I often comment that musicians can hear things that other people cannot, and research confirms that musicians have better auditory perception, better working memory, and better ability to discriminate speech in noise, than the average non-musician.1,2

Almost all musical instruments are capable of producing damaging sound levels, and virtually all musicians are at increased risk of developing music-induced hearing disorders (hearing loss, tinnitus, pitch-perception problems, and loudness intolerance) from high sound levels. Because musicians have such finely tuned auditory abilities, and the fact that they need to hear their own and other musicians’ instruments when they play, industrial-type hearing protectors are not appropriate in most cases. Moderate-attenuation, high-fidelity hearing protectors, on the other hand, reduce the risk of music-induced hearing disorders while allowing the musician to hear clearly.3,4

The average open ear canal has an acoustic resonant peak of approximately 17 dB at 2700 Hz. Placing an earplug in the ear removes this natural resonance, resulting in unbalanced attenuation that makes music and voices sound muffled and unclear.

A high-fidelity earplug is designed to match the open ear response by adding back the resonant peak. Attenuation should be as even as possible across the frequency spectrum to preserve the timbre and quality of sound, so that sound heard while wearing high-fidelity earplugs is essentially the same as the original, only quieter (Figure 1). 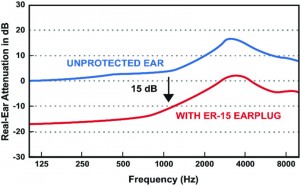 Custom Musicians Earplugs™ have been the high-fidelity hearing protector of choice for professional musicians and music lovers for over 25 years (Figure 2). Musicians Earplugs consist of a diaphragm, which functions as an acoustic compliance, and a custom earmold, in which the volume of the air in the sound bore acts as an acoustic mass. The combination of the two produces a resonance at approximately 2700 Hz, resulting in smooth, flat attenuation across the frequency range. 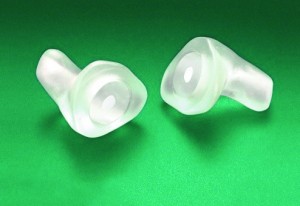 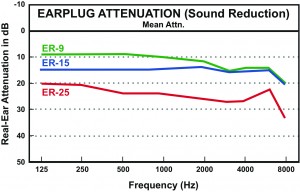 Attenuator buttons—often referred to as filters—are interchangeable, which allows musicians to choose the filter strength most appropriate for a given situation. Figure 4 shows recommended filters for various instruments and situations. Since many musicians perform in a variety of groups and venues, they may need two, or even all three, sets of filters. 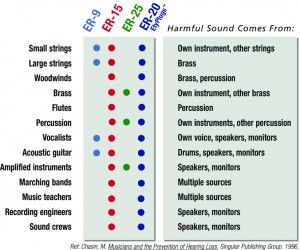 Some musicians even use a different filter in each ear; I once worked with a guitarist who wore an ER-15 in one ear and an ER-25 in the other ear (the ear closer to the drummer). He had optimal protection for both ears, and with the higher input (from the drum set) to the ear with the ER-25, he didn’t feel unbalanced. Filters are available in multiple colors (red, blue, brown, tan, and clear). When musicians use multiple filters, it’s helpful to order each set of filters in a different color for easy identification.

Earmolds for Musicians Earplugs should be made of silicone, which doesn’t shrink or change shape. The properties of vinyl make it a poor choice for this application: earmolds made of vinyl shrink over time, possibly leaving the musician with an inadequate seal.

ER-9, ER-15, and ER-25 filters are individually tested to verify acoustic performance to a tight tolerance. Ear canals, however, are like fingerprints: no two are exactly alike. Earmold labs that make Musicians Earplugs use an acoustic mass meter to measure the response of the earmolds. Even with careful impression techniques and good mold manufacturing, it is possible that the finished product may not be optimal. An unacceptable frequency response with Musicians Earplugs is nearly always the result of inadequate earmold fit.5

Tips for better results. Optimizing the fit of Musicians Earplugs requires that ear impressions extend past the second bend of the ear canal, and the movements the musician typically makes should be taken into account when the impressions are curing. Earmolds made for Musicians Earplugs must seal the ear canal deeply, past the second bend of the canal. Earmolds with a shallow seal produce occlusion effect.5,6 Further, earmolds that do not seal well let in low frequencies, resulting in unbalanced attenuation.

I’ve found it useful to ask musicians to play (or simulate playing) their instrument while impressions are curing: vocalists should sing; horn players can use a mouthpiece; drummers can play on a practice pad, etc. Additional recommendations for impression techniques and ordering options can be found in Johnson.7

Fit and performance (attenuation and occlusion effect) of the finished product should always be verified (see Marshall Chasin’s publications8-10 for suggestions regarding verification). Even the most experienced, careful clinicians may need to remake earmolds from time to time. Earmold fit, comfort, seal, and occlusion effect should all be assessed. Ear canals aren’t static; they move and change shape, and some ears are simply more difficult to fit than others.

Musicians prone to issues with occlusion effect (eg, horn players) are also more challenging. On occasion, I’ve remade earmolds several times to attain a seal deep enough to minimize occlusion effect. Vocalists may sometimes want a bit of occlusion effect to hear their own voice better, so it’s important to discuss the musician’s personal needs and preferences before ordering the molds.

Occasionally, an ear canal is so narrow that a long earmold that seals past the second bend results in a response that rolls off the high frequencies (due to the sound bore narrowing deep in the canal). In that case, a flat response can only be achieved using a shorter earmold that seals before the second bend, where the canal is wide enough to accommodate a larger bore. The trade-off is increased occlusion effect.

The performance of Musicians Earplugs has been independently verified over the past 25 years by multiple laboratories worldwide, including, but not limited to: EAR-Cal in the United States; TNO in Holland; and PZT GmbH in Germany. In all cases, performance was found to be equal to or better than the published performance data. 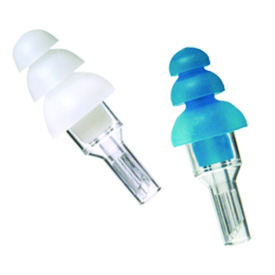 ETY-Plugs®, the first high-fidelity non-custom earplugs, are an inexpensive alternative to Musicians Earplugs (Figure 5). ETY-Plugs have a tuned resonator and acoustic resistor that replicate the response of the open ear, resulting in relatively flat 20-dB attenuation across frequency. These earplugs are particularly suitable for concerts and music festivals because they are designed to allow speech and music to be heard clearly.

Millions of young musicians are involved in band, marching band, and drum and bugle corps in middle schools, high schools, and colleges across the country, with sound exposures that put them at real risk of developing music-induced hearing disorders. Marching band and drum and bugle corps members learn to play loudly in order to project their sound when performing in an arena, sports venue, or parade. This requires that they practice at loud levels, sometimes for hours at a time. Band rooms are typically crowded and reverberant, and high sound levels can put them at risk in 5 minutes or less.4 When used correctly, ETY-Plugs provide 20 dB of attenuation, which extends allowable playing time by a factor of 100 (eg, a limit of 5 minutes without earplugs is extended to over 8 hours).

Today’s music instructors are increasingly aware of the dangers of high sound levels and the importance of using hearing protection. However, many may not be aware that inexpensive, high-fidelity options are available. This lack of awareness is an opportunity for hearing care professionals to provide education and hearing protection to schools in their communities.

Adaptation. Some musicians adapt to the use of high-fidelity earplugs almost immediately. Some musicians who have played many years without hearing protection may need time to adapt to earplugs. The rewards are worth it: Musicians often report relief from tinnitus and less fatigue after rehearsals when they use earplugs. Marching band students often find that they hear and play better as a group while wearing ETY-Plugs. With very high sound levels, the ears overload and distort, making it difficult to hear each instrument. With high-fidelity earplugs, overload distortion is reduced or eliminated and instruments are heard clearly.

The ideal earplug is one that automatically adapts to changes in sound levels, providing protection when needed and natural hearing when sound levels are low. For example, a musician playing in a symphony may need protection from sustained high-level sound and loud transients (eg, cymbal), but also need to hear the conductor’s instructions across the stage during rehearsal. A music instructor may need to hear students asking questions from the back of the room, and then need protection from high-level sound when the band plays. MusicPRO® earplugs are high-fidelity electronic earplugs designed specifically for musicians. These earplugs handle high input levels without distorting, and their balanced-armature drivers produce a bandwidth of 40 Hz to 16 kHz. 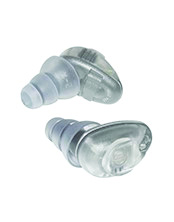 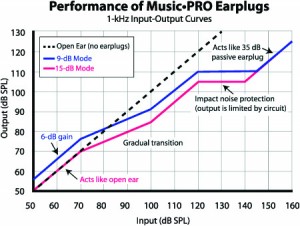 MusicPRO electronic earplugs effectively combine two versions of Musicians Earplugs in the same device (ER-9 and ER-15). They automatically activate when protection is needed, but are transparent for quiet sounds or provide a slight boost depending on switch position (Figure 7).

Protection from transient bursts. MusicPRO earplugs limit sudden impacts two ways: 1) by the output limitation of the circuit, and 2) by the seal to the ear. Transients have very short duration (milliseconds) so compression time constants of the circuit are not a factor in limiting output. If a 125-dB transient occurs, output is limited by the seal in the ear; the circuit cannot pass more than 120 dB. Recovery time is almost instantaneous. Again, a deep seal is important for protection from high level transients, and reduces occlusion effect.